In 1999, the state of Utah passed legislation that every newborn be screened at birth. According to the Utah state department of health, hearing loss is the most common birth defect in the state of Utah. It is estimated that approximately 3 of every 1000 births have some degree of hearing loss. The goal of newborn screening is to detect and diagnose hearing loss early enough that speech and language development are minimally affected. According to the Better Hearing Institute, even a mild hearing loss can seriously impact a child’s ability to learn in a school environment.

Newborn screening is typically performed in the hospital within two days after being born. If the child does not pass their initial screen, referrals are sent for diagnostic hearing testing and to an ENT physician. 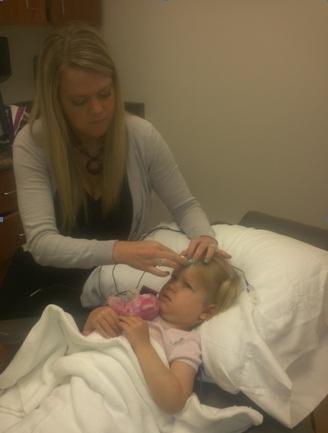 Our otolaryngologists are able to rule out and treat temporary causes of hearing loss. With the help of our audiology staff, diagnostic testing via auditory brainstem response (ABR) testing is completed without sedation and does not require an observable response from the infant. This testing is used to diagnose varying degrees of permanent hearing loss. If permanent hearing loss is confirmed, the audiologists are able to recommend and fit hearing aids. Infants can begin to use hearing aids as early as 2-4 months of age. Benefits of early detection have been known to show better improvements in speech and language development.

Our audiologists at our Lone Peak office are able to test and treat children of all ages. They work closely with the physicians to aid in diagnosis and to offer the best treatment available. Otoacoustic emissions (OAE) and behavioral testing, including Video Reinforcement Audiometry (VRA) and Conditioned Play Audiometry (CPA) are also performed at our Lone Peak Draper office.